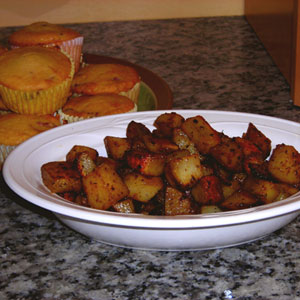 Peel potatoes and dice into bite sized pieces. Try to keep the pieces about the same size so they'll all be done at the same time. You want to do only enough potatoes that they'll fit in your skillet in a single layer.

Heat a large skillet over medium-high heat. Add some oil - not a lot, just enough to keep the potatoes from sticking. In my skillet, that's about 2 Tbsp. (If yours is bigger than mine, you'll use more. For a smaller skillet, use less.) You may have to add some more oil later as they cook if the pan dries out and the potatoes start to stick.

Season the potatoes liberally with salt and pepper or your favorite seasoning blend. I'm partial to Penzey's Northwood Seasoning. Stir.

Grab a good book, you're going to be here a while. (Diana timed it - 23 minutes from add-the-potatoes to would-you-come-to-the-table-already)

Stir occasionally. If the potatoes start to stick, then add a little more oil. Potatoes are done when they're fork tender, soft all the way through. (If your pieces are smaller than bigger, then it'll be quicker.)

Serve as part of a hearty brunch, alongside sausage and bacon, a couple fried eggs, maybe a pancake or two...Grand Slam!
Submitted by Gretchen Grant
Contributed on: Sunday May 6th, 2007 and modified on Monday October 25th, 2010